The Question About an Out-of-State License 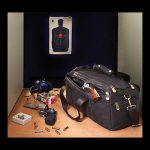 On occasion I receive a call from someone who has moved to Oklahoma or is about to move to Oklahoma.  Their question is; since I have moved to Oklahoma and my conceal and carry license from my home state is still in effect do I have to get an Oklahoma license?  First of all, let’s make it clear that Oklahoma does not allow the transfer of the conceal and carry permit from any state to Oklahoma.  However, Oklahoma does recognize the conceal or open carry permit issued by any other state as long as that permit is still valid.  Although many states have conceal and carry permit laws, there are significant differences between the states.  For example Texas and Oklahoma conceal and carry laws are almost identical. But if you moved to the state of Texas and establish a residency there, you are expected to obtain a Texas CHL.  If you move to the state of Oklahoma and your home state permit has not yet expired your permit may, (emphasize may) still be valid to carry in the state of Oklahoma.  The catch is this, if you move out of your home state and establish residency in another state such as Oklahoma, your home state may consider your license invalid at that point.  There are also some states which will consider your permit valid even though you have changed your state of residence.  So your best course of action is to check with the agency who originally issued your permit.  If that agency still considers your permit valid even though you have changed your state of residency, Oklahoma statutes say they will recognize any valid concealed or unconcealed permit issued by another state. However, if the original issuing agency says your permit is invalid if you’re no longer a resident of that state then you must proceed with obtaining an Oklahoma carry permit.  To my knowledge there is no exemption to any part of the process simply because you previously held a permit from another state.

Your First Responder May be Nextdoor 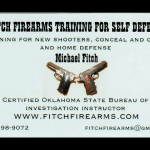 Marianne is a 41-year-old widow who has learned the realities of living alone and doing everything by herself. It still bothers her when she walks into a restaurant and the greeter “asks how many in your party,” her response is always the same; “it’s just me.” It’s an unintended, still sensitive reminder of her solitary existence.  Bob has been gone for two years now, but Marianne still misses him every single day.  She rises early and usually catches the morning news. For the last several months it seems more violence is being reported here in Springfield.  She earned her conceal and carry permit 3 months ago and goes to the range twice a month to practice diligently.

Phil and Jenny have lived next door to Marianne for seven years. They have become close friends and they provided much-needed emotional support when Marianne lost Bob.  Jenny’s eyesight has been failing her for the past three years, she is now legally blind.  Jenny and Marianne are in the back part of the house talking when a thunderous sound shakes the house as the front door is kicked in.   Shattering glass and shouting emanate from the living room.  Then the ear splitting report of two gunshots reverberated within the walls. Simultaneously, Jenny began to scream in panic mode, while Phil is shouting with pain and struggling for his life.  Their home has been invaded by two savage men bent on taking jewelry, credit cards, guns, and pin numbers from the seemingly helpless older couple.

With remarkable calm Marianne grabs her pistol loaded with 9 millimeter hollow points.  Stealthily, she moves along the wall concealing herself from the intruders as much as possible.  Finally she steps into the passage way of the living room and sees one man mercilessly beating Phil senseless.  The other intruder spots Marianne and raises his gun to fire.  She had already sighted in on the center of the man’s chest.  Muscle memory took over and she hit center mass with 2 rapid presses on the trigger.  The man beating Phil was startled and dropped him to the floor.  As he leaped toward Marianne she fired four more shots at him, missing only twice.  The room was filled with smoke, the acrid smell of gunfire, and a significant amount blood.  The intruders were screaming and thrashing about on the floor.  With his last ounce of strength Phil retrieved the invader’s pistols, and called 911 while Marianne put in a new loaded magazine and guarded the men on the floor.  The police and two ambulances arrived within minutes.

Marianne had made a vow to herself not to be a victim.  From her conceal and carry class she knew her rights, she knew when to shoot and when to stop.  By going through similar scenarios in mental exercises, she already had a planned response.  Her trips to practice at the firing range provided the expertise needed at that critical moment.  She is now enrolled in combat shooting class, her belief is you perform up to the level your training.

Phil is recovering nicely, and is signed up to attend a conceal and carry class next month.  Thanks to the second amendment, the “Castle Doctrine” and the “Stand Your Ground Law,” and a fair amount of courage, Marianne staved off what could have been a cruel, senseless disaster.  Bob, would be proud of her.